By European Society of Human Reproduction and Embryology

A follow-up study of almost 20,000 young women who had a first cycle of IVF in Denmark between 1995 and 2014 indicates that those who responded poorly to treatment, with few eggs collected, are at a significantly increased risk of later age-related diseases. The findings, says investigator Mette Wulf Christensen from Aarhus University in Denmark, suggest an "association with early ovarian ageing and an accelerated ageing process in general."

The results, she explains, are consistent with what we know so far about early menopause, which has been shown in several studies to be associated with an increased risk of cardiovascular diseases, osteoporosis and mortality. "Identifying women at risk of early menopause may thus allow early preventive health initiatives in terms of a healthy lifestyle," says Christensen.

This is the first time that the yield of eggs in IVF as a measure of ovarian ageing -- and thus as a risk predictor of age-related ill-health and mortality -- has been investigated in a large-scale cohort study. The results will be presented online today by Ms Christensen, a PhD student, at the virtual Annual Meeting of ESHRE.

The study was based on the national registries of Denmark in which each individual has their own identifying number, thus allowing cross-linkage between various registries of health outcomes and treatments. In this case women below the age of 37 who had a first cycle of IVF or ICSI in Denmark between 1995 and 2014 were divided into one of two groups according to their response to ovarian stimulation: those who had produced five or fewer eggs for collection, defined as "early ovarian ageing"; and those who responded normally with at least eight eggs. The number of eggs harvested was thus used as a marker of ovarian reserve. There were 1,234 women in the former group, and 18,614 in the latter.

During the six-year average period of follow-up, the incidence of chronic disease in the two groups was analysed from the cross-linked registry data, providing a real-life estimate of risk for cardiovascular disease, osteoporosis, type-2 diabetes, cancer, and all-cause mortality. Results showed that women in the early ovarian ageing group had an increased overall risk (by 26%) of all-cause disease when compared to those with a normal ovarian response. This higher risk was statistically significant, and evident in cardiovascular diseases (39% higher) and osteoporosis (more than double). The two groups were also cross-checked with the "early retirement benefit" register, in which the early ovarian ageing group were also more likely to be listed.

The risk of cancer, other age-related diseases and all-cause death was not significantly different.

Commenting on the implications of the results, Ms Christensen said that, although the common biological mechanisms behind ovarian and general ageing are "somewhat obscure," the data from this study demonstrate that young women with early ovarian ageing -- defined as low oocyte output after FSH stimulation -- have an increased risk of age-related morbidity and possibly mortality, "and strongly support the hypothesis that low ovarian reserve may be a useful marker of later health problems." Counselling this group of patients at fertility clinics, she added, "may therefore be important for introducing preventive measures such as lifestyle changes or the use of HRT to reduce the adverse health risks which follow an earlier menopause."

Content provided by Science Daily​ (www.sciencedaily.com) Note: Content, including the the headline, may have been edited for style and length. 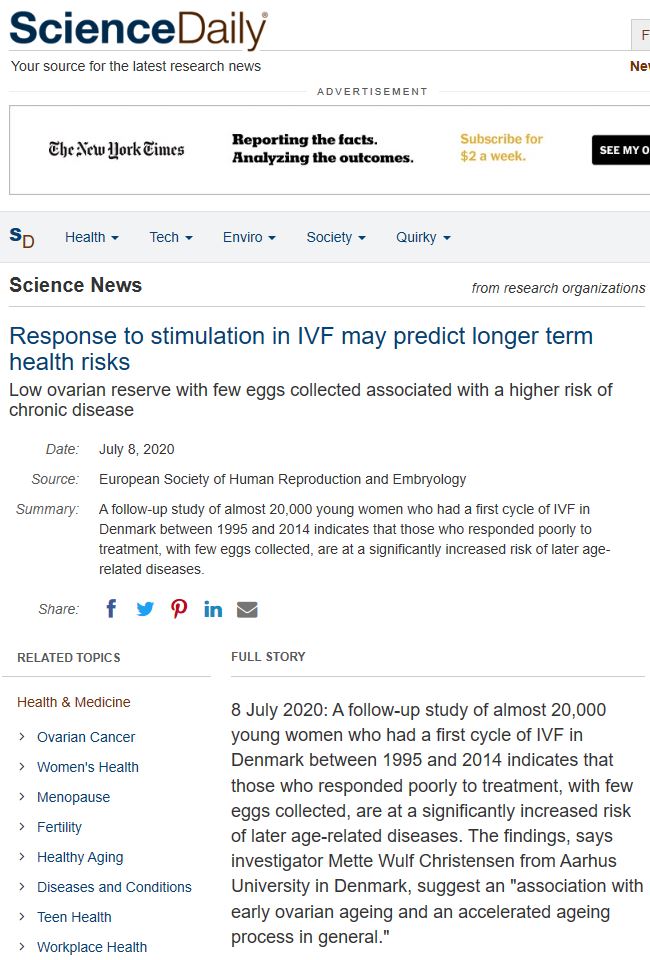