DEVELOPMENT OF A SENSITIVE, QUANTITATIVE ASSAY WITH BROAD SUBTYPE SPECIFICITY FOR DETECTION OF TOTAL HIV-1 NUCLEIC ACIDS IN PLASMA AND pMBC

An LTR-based quantitative PCR (qPCR) assay was modified and optimized for the quantification of total HIV-1 nucleic acids in plasma and PBMC. TaqMan qPCR primers and probes were designed against the NCBI/LANL HIV-1 compendium database by analyzing sequences used in assays for sensitive cross-clade detection of HIV-1 as reported in the literature and elucidating regions of improved cross-subtype specificity. Inosine and mixed nucleotide bases were included at polymorphic sites. Real-time RT-qPCR and qPCR were performed on plasma viral RNA and cellular lysates. A step-up amplification approach to allow binding of primers across polymorphic regions showed improved sensitivity compared to universal cycling. Unlike a lead competing laboratory-developed assay, all major HIV-1 subtypes, and a wide range of recombinants from a 127-member diversity panel were detected and accurately quantified in spiked plasmas. Semi-nested PCR increased detection sensitivity even further. The assay was able to detect down to 88 copies/mL of HIV-1 in plasma with 95% efficiency or the equivalent of a single infected cell. The PCR assay will be valuable in studies that monitor very low viral levels including residual or break through HIV-1 in patients receiving antiretroviral therapy, in HIV-1 cure, and in other research studies.

In order to effectively monitor HIV-1 combination anti-retroviral therapy (cART) and support HIV-1 cure studies internationally, there is a need for relatively simple low-cost sensitive assays that can reliably quantify low levels of HIV-1, across different viral subtypes HIV suppression, following initiation of cART, to levels that are undetectable by commercial viral load assays (i.e., below 20–50 copies/ml in plasma), is significantly associated with longevity and improved quality of life. Moreover, since successfully treated people do not transmit the virus, early and sustained viral suppression is an important public health tool in the prevention of the spread of HIV. Current WHO guidelines thus strongly recommend initiation of cART as soon as possible after HIV-1 diagnosis

Interestingly, the use of highly sensitive laboratory developed assays (LDAs), such as the Single-Copy Assay (SCA) which detects down to 1 copy of HIV-1 RNA per ml of plasma, has shown that discontinuation of antiretroviral treatment by HIV-infected patients with plasma RNA levels above 10–15 copies/ml results in viremia rebound earlier and more often than patients who have lower or undetectable RNA. These results indicate that candidates for viral control or cure studies may have better success if viral loads are driven below 15 copies/ml before treatment cessation.

HIV-1 DNA integrates into the human chromosome and persists in an inactive state even in the presence of ongoing antiretroviral therapy. This means that reduction of plasma viral load to low levels, even below 10–15 copies/ml as indicated by the highly efficient SCA assay, does not lead to viral eradication. The integrated viral DNA serves as a long-term reservoir for viral reinfection and can be reactivated when therapy is discontinued or when drug-resistant isolates emerge. Despite dramatic decreases in plasma HIV-1 RNA levels following treatment with cART, levels of integrated viral DNA in virally suppressed subjects persist at similar levels to those of untreated subjects. HIV-1 viral reservoir sites include CD4 memory T cells, lymph nodes, the gut and other tissues. To measure the levels of replication-competent integrated DNA within these reservoir sites, various assays have been developed. The quantitative virus outgrowth assay (QVOA) is considered the gold-standard assay for this type of assessment, but is complicated, expensive and time intensive, and despite recent improvements, is not practical for routine viral monitoring.

Alternative assays have been developed to quantify cell-associated viral nucleic acids for measurement of residual quiescent viral genomes. Indeed, several studies have shown that viral nucleic acids can be readily detected in whole blood and peripheral blood mononuclear cells (PBMCs) of HIV-1 infected individuals even when plasma viral load is very low or undetectable. The level of residual HIV-1 DNA in the PBMCs of treated subjects ranges from 100 to 10,000 copies of HIV-1 DNA per million cells and remains sufficiently high as to allow for reliable detection of quiescent infection, with only those who have initiated therapy during Fiebig disease stage I or II at lower levels. These alternative cell-based PCR assays have been shown to correlate well with the QVOA and thus the latent viral reservoir. These simplified assays are used as a proxy for viral reservoir estimation and provide a more efficient tool for large-scale patient screening and research because they can be tailored to the available specimens and can be run at lower cost (~ < $4 per test) compared to FDA-approved plasma viral load assays ($50–100+ per test).

Another lingering issue in global HIV-1 treatment and monitoring is that many of the original LDAs for HIV-1 quantification used in clinical research were developed against HIV-1 subtype B, the predominant subtype circulating in Europe and America. This subtype only accounts for 10% of the infections worldwide. Rapid spread of HIV in Africa and Asia and increased international travel have led to a steady increase in non-B HIV-1 in the western hemisphere. Current HIV-1 isolates have been classified into three major groups (M, N and O) and further subdivided into subtypes or clades, various circulating recombinant forms (CRFs) and unique recombinant forms (URFs) spanning up to 40% sequence divergence. A major challenge in the design and implementation of LDAs for HIV-1, therefore, is the large worldwide sequence diversity of the virus and the lack of ability of current LDAs to cover the broad range of HIV-1 subtypes in various target populations. Moreover, the extensive variability in sample processing and amplification procedures among the various LDAs, makes it difficult to compare subtype sensitivity and specificity between different test formats and laboratories. Several programs, such as the HIV Reservoir Assay Validation and Evaluation Network (RAVEN) project (www.cavd.org), and the NIH/NIAID/DIAIDS External Quality Assurance Program Oversight Laboratory (EQAPOL) (https://eqapol.dhvi.duke.edu/) have emerged to provide standardized platforms for assay validation and to provide guidance for the minimum information needed for publication of quantitative real-time PCR experiments (MIQE). These QC programs and reagents help ensure assay claims and allow comparison of performance across different assays and laboratories.

Here, we describe a sensitive polymerase chain reaction (PCR)-based assay which can be used in various formats to detect residual HIV-1 nucleic acids in the plasma and PBMCs of HIV-1 infected individuals undergoing cART. In the traditional non-nested liquid format, the assay can detect 88 copies of HIV-1 RNA per ml with 95% efficiency. A semi-nested liquid format allows for greater sensitivity. In the alternative cellular format, the assay can detect down to 3 input copies of nucleic acid or the equivalent of a single infected cell at the 95% confidence level. Compared to previously reported LDAs, our assay provides improved efficiency, a very broad dynamic range and much improved cross-subtype specificity. We have evaluated this assay according to MIQE guidelines using an extensive diversity panel of HIV-1 strains provided by EQAPOL and the United States Military HIV Research Program (US MHRP) via the AIDS Reagent Program. It has comparable sensitivity to current commercial PCR-based HIV-1 assays used for plasma viral load testing and for sensitive detection of cell-associated HIV-1 levels in PBMCs but is considerably cheaper to perform which greatly increases its utility in resource-limited settings. Please note that this technology is the subject of a priority patent application. Any parties wishing to commercialize these assays or variations thereof, please contact Imperial College London via enterprise@imperial.ac.uk, citing reference number 10579.

Initial screening of published nucleotides found that the 496F/546P/633R primer–probe set (Brussel 2005), with an optional Friedrich 2010 internal reverse primer 622R produced the best and most consistent results but showed limited specificity for non-subtype B isolates on a sub-panel of 20 EQAPOL isolates that were difficult to detect and accurately quantify.

Further optimization, including adjustment of oligonucleotide concentration, utilization of nested PCR, step-up cycling and addition of tRNA to the master-mix, resulted in improved assay performance with a standard curve of > 90% efficiency, a linear range over 5 logs and a LLOD/LLOQ95 of 3 input copies of HIV RNA, but did not enhance the detection of non-detectable viral strains.

Subsequent sequence analysis of these oligonucleotide sets against the HIV-1 LANL compendium database, showed significant mismatch issues and indicated the need to revise the assay oligonucleotides.

A revised set of oligonucleotides was designed using AlleleID 7.0 software and the IDT Oligoanalyzer tool as detailed in the methods.

Assay optimization of the revised oligonucleotides was performed on a variety of instruments and finalized on a QuantiStudio 3™ thermocycler (ThermoFisher Scientific) using a major groove binding (MGB) probe containing a non-fluorescent quencher. The MGB group at the 3′ end of the probe increased its melting temperature (Tm) while the NFQ component of the probe quenched the signal from the 6FAM fluorescent dye before hydrolysis, in a manner that resulted in an even lower background signal than a non-NFQ probe. The finalized protocol as described in the methods resulted in a greatly improved assay with a linear dynamic range of over 7 logs.

Content provided by Nature ​(www.nature.com) Note: Content, including the the headline, may have been edited for style and length. 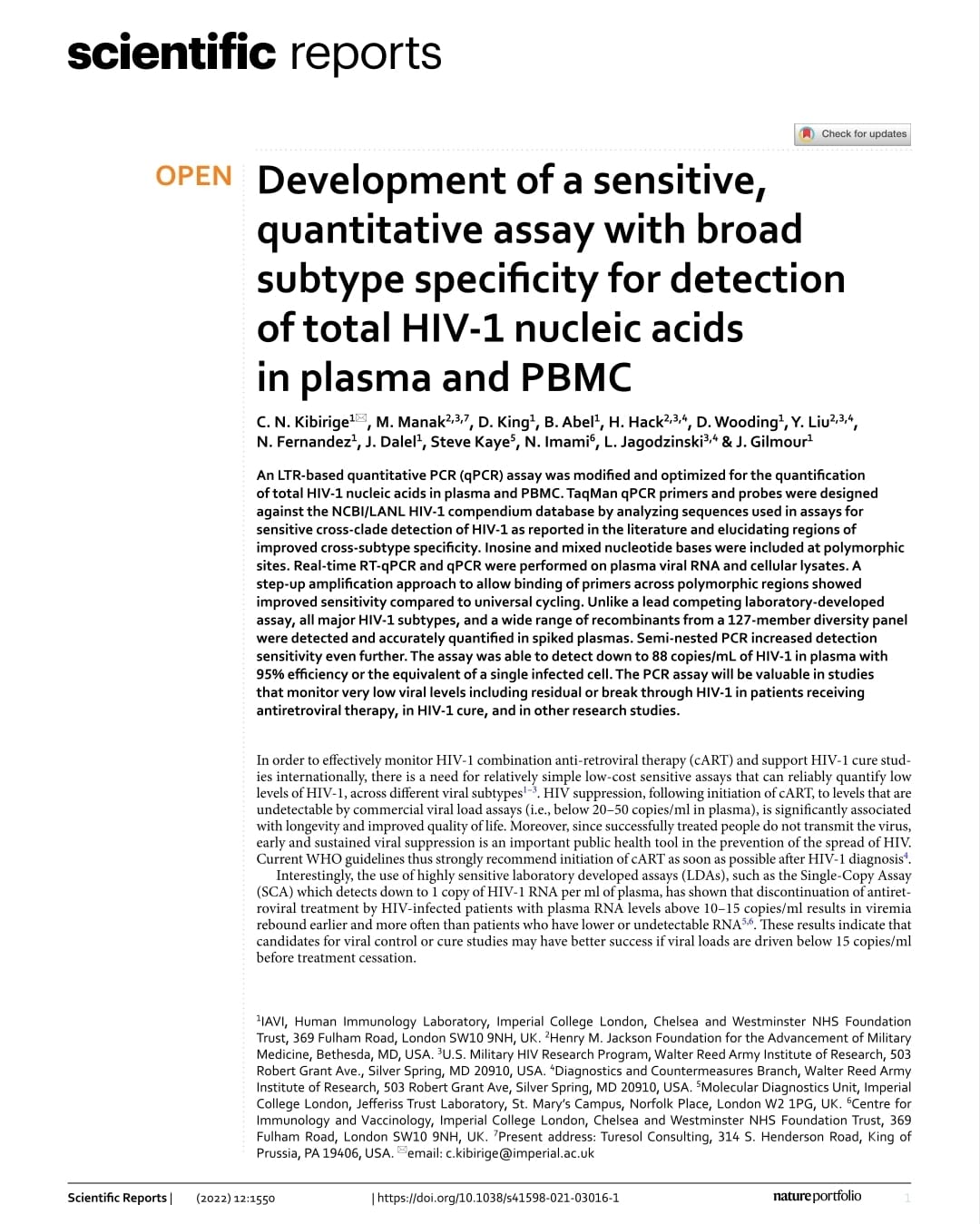