Content provided by W.H.O​ (www.who.int) Note: Content, including the headline, may have been edited for style and length.

As of 5 June 2022, over 529 million confirmed cases and over six million deaths have been reported globally. These trends should be interpreted with caution as several countries have been progressively changing COVID-19testing strategies, resulting in lower overall numbers of tests performed and consequently lower numbers of cases detected.

Special Focus; Update on SARS-CoV-2 variants on interest and variants of concern

WHO, in collaboration with national authorities, institutions and researchers, routinely assesses if variants of SARS- CoV-2 alter transmission or disease characteristics, or impact the effectiveness of vaccines, therapeutics, diagnostics or public health and social measures(PHSM) applied to control disease spread. Potential variants of concern (VOCs), variants of interest (VOIs) or variants under monitoring (VUMs) are regularly assessed based on the risk posed to global public health.

Geographic spread and prevalence of VOCs

The Omicron VOC continues to be the dominant variant circulating globally, accounting for nearly all sequences reported to GISAID in the last 30 days. Due to very low circulation among sequences submitted to GISAID in the last three months, Delta is now categorized by WHO as a ‘previously circulating VOC,’ in the same way that Alpha, Beta and Gamma are categorized. Importantly however this does not imply that previously circulating VOCs cannot resurge in the future and WHO will continue to monitor using available data.

Among Omicron lineages, as of epidemiological week 20 (15 to 21 May 2020), BA.2 and its descendent lineages (pooled lineages named BA.2.X) are declining but remain dominant, accounting for 44% and 19% respectively (figure4, Table 2). Several variants with preliminary evidence of a growth advantage over other Omicron lineages show a global prevalence of <1% and are no longer rising, namely BA.2.11, BA.2.13, and BA.2.9.1. These lineages have in common the acquisition of a mutation at the locus S:L452X. Former dominant Omicron lineages BA.1, BA.1.1. BA.1.Xand BA.3 sublineages have declined to <1%.

Globally, BA.2.12.1, BA.5, and BA.4 variants are rising in prevalence. As of week 20, BA.2.12.1 (detected in 53 countries) has reached a prevalence of 28%, a prevalence that may be largely attributed to an initial rapid increase in the Region of the Americas. BA.5 (detected in 47 countries)and BA.4 (detected in 42 countries) account for 4% and 2% of circulating variants, respectively. All three variants carry the signature mutation at locus S:L452 that is thought to confer greater transmissibility through higher cell fusogenicity and immune escape characteristics. Accumulating evidence from several countries indicates that there has been no observed increase in severity associated with BA.5 and BA.4.1 No evidence is available at the current time on disease severity associated with BA.2.12.1.

As for the recombinant variants of SARS-CoV-2 detected in early 2022, including recombinants of known VOCs,a few had characteristics indicative of a potential for increased transmissibility; however, this did not translate into a widespread. The number of SARS-CoV-2recombinant sequences submitted to GISAID which were being monitored by WHO or which showed an initial rise in the number of sequences reported (XE, XD and XF) continues to decline weekly, now representing <0.1% of sequences submitted during week 20.

Content provided by W.H.O​ (www.who.int) Note: Content, including the the headline, may have been edited for style and length. 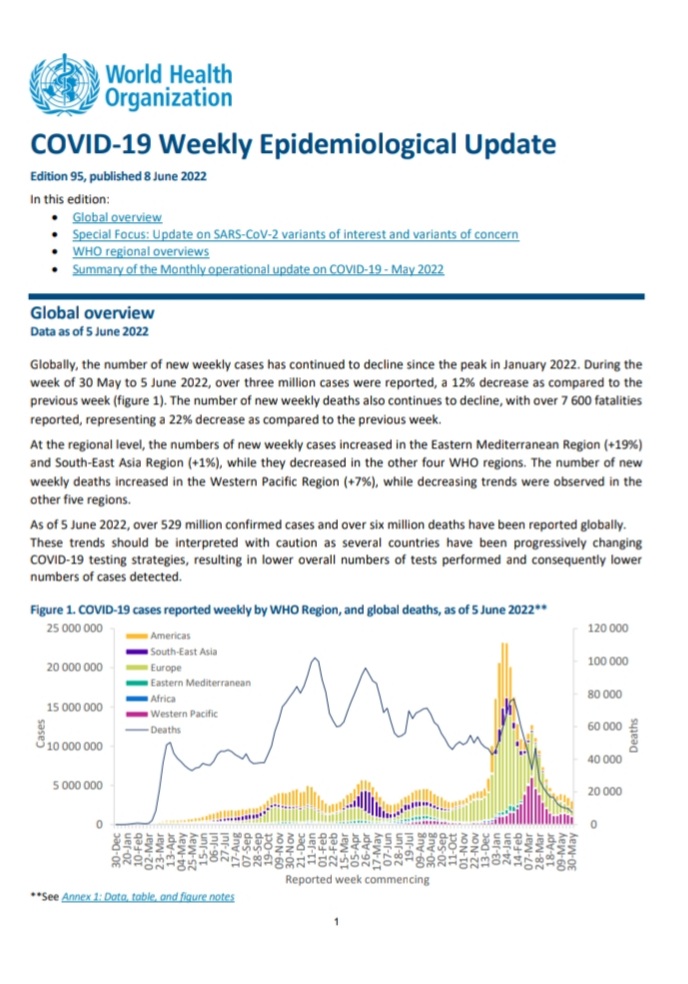